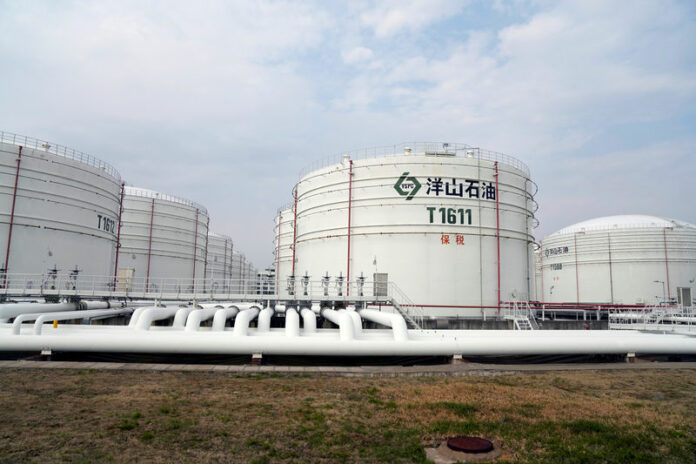 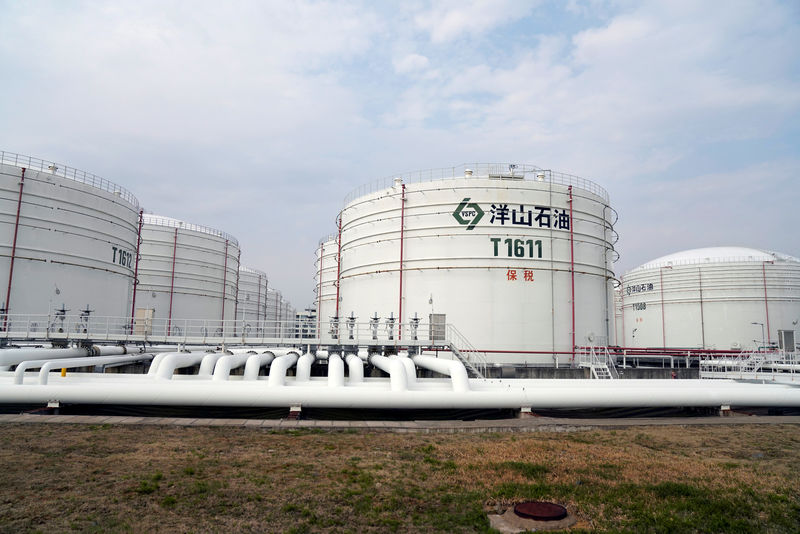 © Reuters. FILE PHOTO: Oil tanks are seen at an oil warehouse at Yangshan port in Shanghai

BEIJING/SINGAPORE (Reuters) – Five companies will deliver crude next month to buyers through the Shanghai International Energy Exchange’s (INE) oil futures, the first physical settlement of the contract that China hopes will compete with global benchmarks.

The companies, including state-owned Unipec and Zhenhua Oil, will deliver a combined 600,00 barrels of Middle Eastern crude to buyers of the INE’s September crude futures contract, said five sources with knowledge of the matter.

The INE launched the contract in March with September 0#ISC:> as the first month of delivery to give participants time to accumulate supplies for the physical delivery and for the contract to develop.

China, the world’s largest oil importer, wants the future contract to evolve into a third global price benchmark on par with traded in London and West Texas Intermediate in the United States.

Smooth deliveries of crude through the INE mechanism will be key to its success.

“We’re all going to be watching deliverability, to see if it goes off well. If there are no glitches and decent volumes delivered, I think there’s tremendous potential,” said John Driscoll, managing director of consultancy JTD Energy in Singapore.

Unipec, the trading arm of Asia’s largest refiner Sinopec Corp, is set to deliver about 200,000 barrels of Iraq’s Basra Light crude to Sinopec-operated storage tanks at Ceze Island, off the eastern province of Zhejiang.

CNPC Fuel Oil Co, Zhenhua Oil and a third firm will each deliver 100,000 barrels of Basra Light into a storage farm in the southern port of Zhanjiang, which is operated by CNPC Fuel Oil, the sources said.

The third firm is an unidentified private company, the sources said.

Chinaoil, the trading unit of China National Petroleum Corp, will deliver 100,000 barrels of Oman crude to storage tanks in the northeastern city of Dalian, said the sources.

In June, Chinaoil moved about half a million barrels of Oman into storage in Dalian, owned and operated by CNPC, to prepare for an eventual delivery against the INE contract.

The 600,000 barrels of oil to be delivered next month is equal to 600 contracts of the September future held to delivery based a lot size of 1,000 barrels.

CNPC’s tanks in Dalian are connected with its unit PetroChina’s refineries in the city and the tanks in Ceze have direct access to Sinopec’s plants.

Only the Zhanjiang storage is a standalone facility with no pipelines to nearby refineries.

The delivery points are among eight sites the INE has chosen for cargoes to be delivered to fulfil the futures contracts.

It is not immediately clear who will take the deliveries. The high storage costs for these tanks, the need to find buyers with import quotas and costly domestic shipping have been some of the concerns raised by traders about the INE contract’s delivery mechanism.

A senior INE official said the exchange normally does not publish information about deliveries.

CNPC declined to comment. Unipec and Zhenhua Oil did not immediately respond to a request for comment.