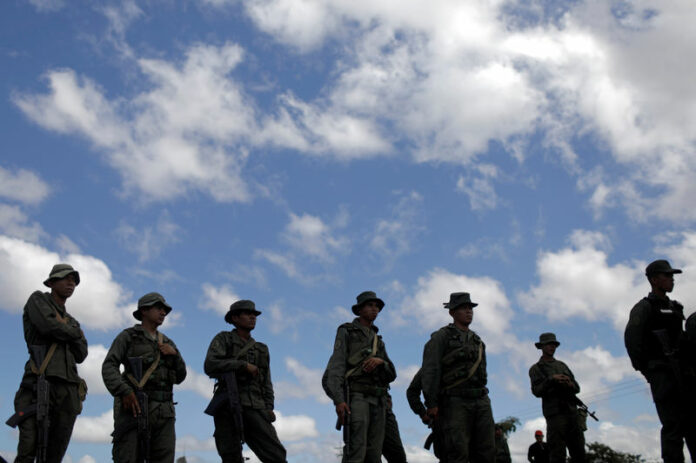 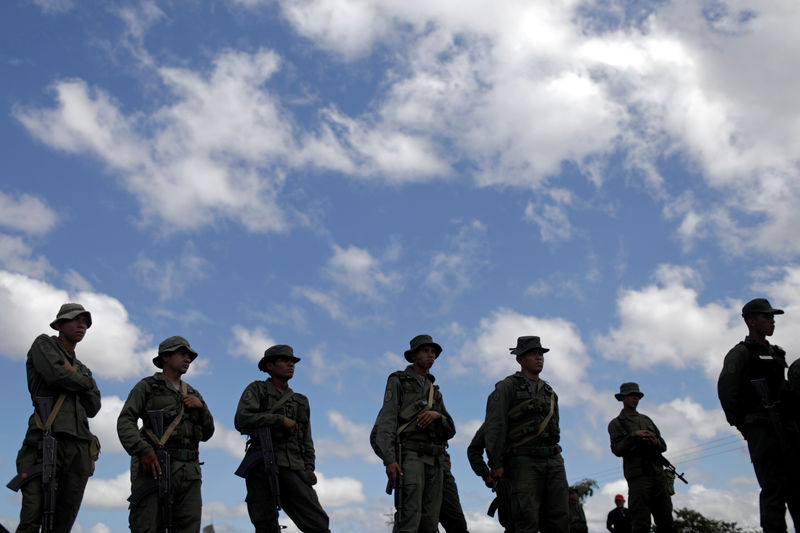 © Reuters. Venezuelan soldiers stand guard at the border between Venezuela and Brazil in Pacaraima

By Carlos Suniaga and Nelson Bocanegra

KUMARAKAPAY, Venezuela/CUCUTA, Colombia (Reuters) – Venezuelan soldiers opened fire on members of an indigenous community near the border with Brazil on Friday, killing at least one and injuring others, as President Nicolas Maduro defied U.S.-backed efforts to bring aid into his economically devastated nation.

The United States, which is among dozens of Western nations to recognize opposition leader Juan Guaido as Venezuela’s legitimate president, has been stockpiling aid in the Colombian frontier town of Cucuta to ship across the border this weekend.

With tensions running high after Guaido invoked the constitution to declare an interim presidency last month, Maduro has denied there is a humanitarian crisis in Venezuela despite widespread shortages of food and medicine and hyperinflation.

Maduro, who took power in 2013 and was re-elected in an election last year widely viewed as fraudulent, says opposition efforts to bring in aid are a U.S.-backed “cheap show” to undermine his government.

The socialist president has declared Venezuela’s southern border with Brazil closed and threatened to do the same with the Colombian border ahead of a Saturday deadline by the opposition to bring in humanitarian assistance.

Some political analysts say Saturday’s showdown is less about solving Venezuela’s needs and more about testing the military’s loyalty toward Maduro by daring it to turn the aid away.

With inflation running at more than 2 million percent a year and currency controls restricting imports of basic goods, a growing share of the country’s roughly 30 million people is suffering from malnutrition.

Friday’s violence broke out in the village of Kumarakapay in southern Venezuela after an indigenous community stopped a military convoy heading toward the border with Brazil that they believed was attempting to block aid from entering, according to two community leaders.

Soldiers later entered the village and opened fire, killing a woman, Zoraida Rodriguez, and her husband, and injuring several others, the leaders said. Rodriguez’s brother Guillermo Rodriguez later told Reuters that the husband was still alive but in critical condition after being shot in the stomach.

“I stood up to them to back the humanitarian aid,” community leader Richard Fernandez told Reuters. “And they came charging at us. They shot innocent people who were in their homes, working.”

Venezuela’s Information Ministry did not immediately reply to a request for comment.

The United States said it condemned the killings that have taken place in Venezuela.

“We stand with the victims’ families in demanding justice,” a State Department official said.

Meanwhile China, which along with Russia backs Maduro, warned humanitarian aid should not be forced in because doing so could lead to violence.

BLOODSHED ‘NOT IN VAIN’

The bloodshed contrasted with the festive ambiance at Branson’s “Venezuela Aid Live” in Cucuta.

Venezuelan and Colombian attendees, some crying, waved flags and chanted “freedom” under a baking sun as more streamed in to watch the concert.

Artists like Jose Luis “El Puma” Rodríguez, who is from Venezuela, called for the ruling socialist government to step down as fans sang along with him.

“Is it too much to ask for freedom after 20 years of ignominy, of a populist Marxist dictatorship?” the singer said. “To the Venezuelans there, don’t give up, the blood that has been spilled was not in vain”.

Guaido has vowed the opposition will bring in foreign aid from neighboring countries on Saturday and called on security forces to disobey Maduro and let supplies into Venezuela.

He set off toward the Colombian border on Thursday in a convoy with opposition lawmakers to oversee the effort.

“You must decide which side you are on in this definitive hour,” Guaido wrote on Twitter. “To all the military: between today and tomorrow, you will define how you want to be remembered.”

Guaido’s move to assume the interim presidency and international backing has galvanized Venezuela’s opposition, which has vowed to keep protesting until Maduro steps down. It previously staged major protests in 2014 and 2017 that waned in the face of government crackdowns.

Yet some government critics are concerned it will take more than pressure to force Maduro to step down.

“The truth is that not even 10 concerts will make damned Maduro leave office,” said Darwin Rendon, one of the 3.4 million Venezuelans to have emigrated since 2015 to find work.

“This regime is difficult to remove,” said Rendon, who sends money back to his family in Caracas.

Several countries have sent supplies to the opposition’s collection points in Cucuta, Brazil and Curacao.

Yet the Venezuelan government overnight soldered three shipping containers, which it has been using to block the traffic lanes on the never-used Tienditas road bridge, to the bridge itself, Colombia’s migration agency said on Friday.

Venezuela this week also closed the maritime border with the Dutch Caribbean islands.

Five of those shot earlier on Friday were rushed by ambulance across the border and were being treated at the Roraima General Hospital in the Brazilian frontier city of Boa Vista, a spokesman for the state governor’s office said.

“They all had gunshot wounds. Three were been treated in the surgery center and two in the trauma sector,” he said.