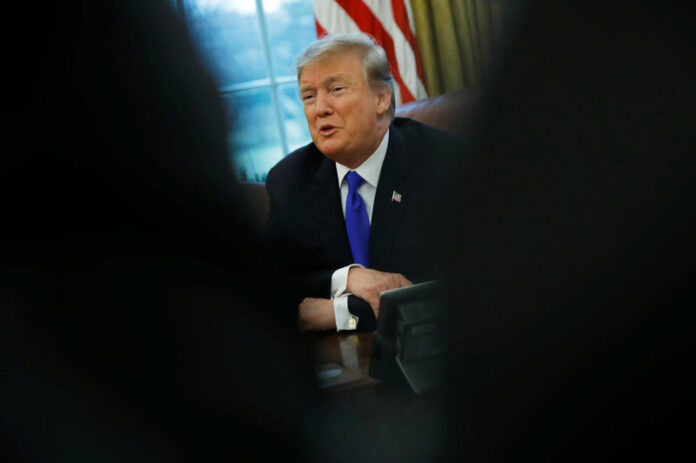 By Jeff Mason and David Lawder

WASHINGTON (Reuters) – President Donald Trump said on Friday there was “a very good chance” the United States would strike a deal with China to end their trade war and that he was inclined to extend his March 1 tariff deadline and meet soon with Chinese President Xi Jinping.

U.S. and Chinese negotiators had made progress and will extend this week’s round of negotiations by two days through Sunday, Trump told reporters at the White House as he met with his top negotiators and their counterpart, Chinese Vice Premier Liu He.

“I think that we both feel there’s a very good chance a deal will happen,” Trump said.

Liu agreed there had been “great progress”.

“From China, we believe that (it) is very likely that it will happen and we hope that ultimately we’ll have a deal. And the Chinese side is ready to make our utmost effort,” he said at the White House.

The Republican president said he probably would meet with Xi in March in Florida to decide on the most important terms of a trade deal.

Extending the deadline would put on hold Trump’s threatened tariff increase to 25 percent from 10 percent on $200 billion of Chinese imports into the United States. That would prevent a further escalation in a trade war that already has disrupted commerce in goods worth hundreds of billions of dollars, slowed global economic growth and roiled markets.

Optimism that the two sides will find a way to end the trade war lifted stocks, especially technology shares. The stock index reached its highest closing level since Nov. 8. Oil prices rose to their highest since mid-November, with reaching a high of $67.73 a barrel. () [O/R]

Announcement of a pact aimed at limiting yuan depreciation was putting “the currency cart before the trade horse,” but would likely be positive for Asian emerging market currencies, said Alan Ruskin, global head of currency strategy at Deutsche Bank (DE:) in New York.

“How can you agree to avoid excessive depreciation or volatility if you have not made an agreement on trade that could have huge FX implications?” Ruskin asked in a note to clients.

In a letter to Trump read aloud by an aide to Liu at the White House, Xi called on negotiators to work hard to strike a deal that benefits both country.

The Justice Department has accused Huawei of conspiring to violate U.S. sanctions on Iran and of stealing robotic technology from T-Mobile US Inc.

Trump appeared at odds with his top negotiator, U.S. Trade Representative Robert Lighthizer, on the preliminary terms that his team is outlining in memorandums of understanding for a deal with China. Trump said he did not like MOUs because they are short term, and he wanted a long-term deal.

“I don’t like MOUs because they don’t mean anything,” Trump said. “Either you are going to make a deal or you’re not.”

Lighthizer responded testily that MOUs were binding, but that he would never use the term again.

Reuters reported exclusively on Wednesday that the two sides were drafting the language for six MOUs covering the most difficult issues in the trade talks that would require structural economic change in China.

Negotiators have struggled this week to agree on specific language within those memorandums to address tough U.S. demands, according to sources familiar with the talks. The six memorandums include cyber theft, intellectual property rights, services, agriculture and non-tariff barriers to trade, including subsidies.

Lighthizer pushed back when questioned on forced technology transfers, saying the two sides made “a lot of progress” on the issue, but did not elaborate.

The United States has said foreign firms in China are often coerced to transfer their technology to Chinese firms if they want to operate there. China denies this.

The U.S. Chamber of Commerce on Friday urged the U.S. government to ensure the deal was comprehensive and addressed core issues, rather than one based on more Chinese short-term purchases of goods.

China has pledged to increase purchases of agricultural produce, energy, semiconductors and industrial goods to reduce its trade surplus with the United States.

China was the top buyer of U.S. soybeans before the trade war, but Beijing’s retaliatory tariffs on U.S. soybeans slashed business that had been worth $12 billion annually.