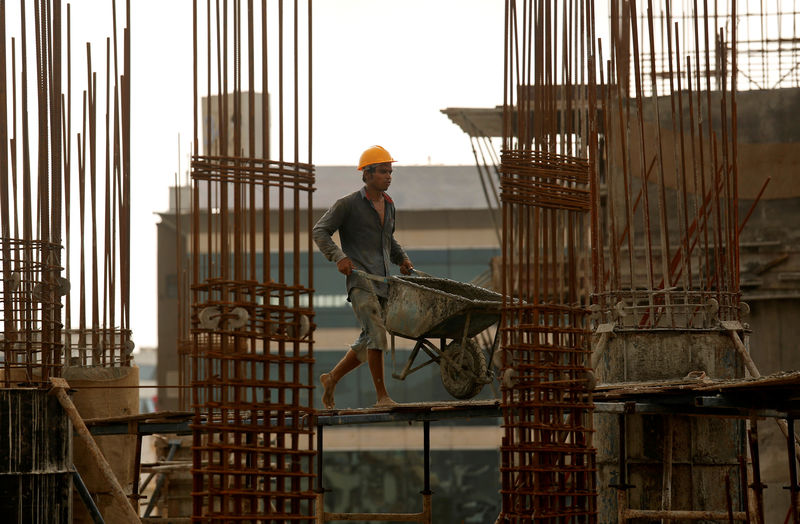 © Reuters. FILE PHOTO: A worker pushes a wheelbarrow to collect cement at a construction site of a residential building in Mumbai

By Promit Mukherjee and Manoj Kumar

MUMBAI (Reuters) – India on Sunday announced a cut in the goods and services tax charged on sales of residential properties under construction as the government looks to stimulate the economy by driving up consumption.

The Goods and Services Tax Council, comprising state and federal finance ministers, announced that the new rate will be 5 percent, down from 12 percent, on all new housing projects except those that are classified as affordable housing, according to a statement from the finance ministry.

The council also decided to slash the tax rate on affordable housing projects to 1 percent from 8 percent, the statement said after a meeting in New Delhi on Sunday.

“This will give boost to housing for all,” Finance Ministr Arun Jaitley said in a Twitter post.

Prime Minister Narendra Modi’s ruling Bharatiya Janata Party has been seeking to stimulate the economy as he faces a general election by May. Concerns about low farm incomes and weak jobs growth have undermined his standing with voters.

Last month, the government announced a change in national sales tax rules that would exempt about two million small businesses from payment of tax.

The residential sector in some parts of the country has been in a torpor following the failure of some property developers.

In and around the capital New Delhi, for example, there are many half-completed properties. Home buyers put deposits down on many of the apartments only to see the developers fail or, in some cases, commit fraud.

The GST Council has revised down tax on hundreds of goods and services in the past 18 months.

The council also altered the definition of affordable housing for India’s secondary and smaller cities.

The statement specified that the council would classify New Delhi, Mumbai, Kolkata, Chennai, Bengaluru and Hyderabad as its metro cities.

The GST council, the statement said, specified that builders, who utilize the lower rate will not be able to get a refund of input tax. The new rates will be applicable from April 1.

Home buyers had complained that builders were not passing on the benefits from the refunds of input tax credit to them.

Input tax is essentially credit received by the builders on payment of taxes on building materials such as cement.

“This decision ahead of the elections could provide some relief to home buyers,” said Abhishek Kumar, president of a homebuyers association.

Earlier in the day, Prime Minister Modi inaugurated a scheme for farmers which promises to give a 6,000 rupees handout to farmers annually, which his government announced during an interim budget on Feb. 1.