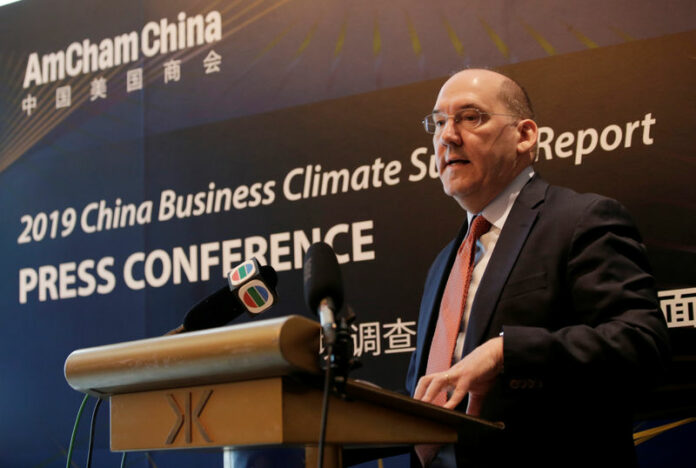 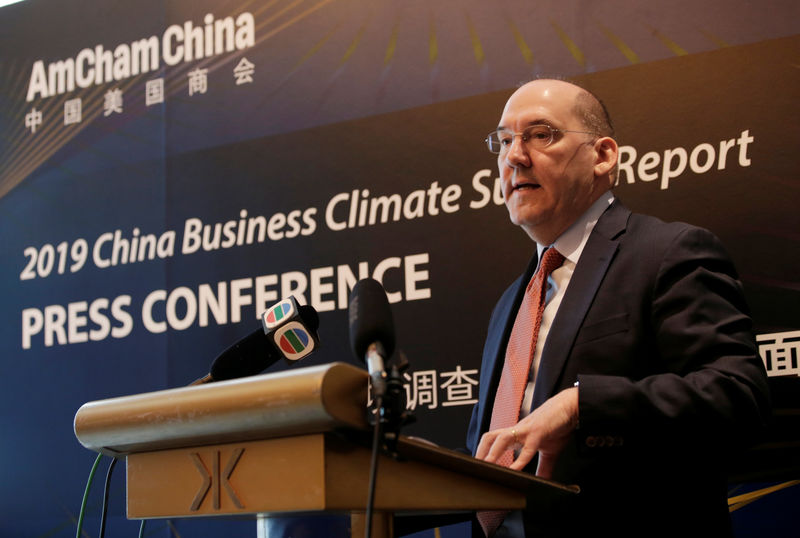 © Reuters. President of the AmCham China Alan Beebe speaks at a news conference in Beijing

BEIJING (Reuters) – A top U.S. business lobby in China said on Tuesday that a majority of its member companies favored the United States retaining tariffs on Chinese goods while Washington and Beijing try to hammer out a deal to end a months-long trade war.

The American Chamber of Commerce in China also said over the past year substantially more of its members are wanting the U.S. government to push Beijing harder to create a level playing field for U.S. business.

U.S. President Donald Trump said on Monday that he may soon sign an agreement with Chinese President Xi Jinping to end the trade dispute if their countries can bridge remaining differences, saying negotiators were “very, very close” to a deal.

That followed Trump’s announcement a day earlier that he would delay a tariff hike on $200 billion of Chinese goods and extend his March 1 deadline for a deal. Washington is demanding an end to the theft of trade secrets and practices that coerce U.S. companies to turn over technology to Chinese firms.

About 10 percent of the chamber’s members favored raising tariffs rates on those $200 billion of Chinese goods from 10 percent to 25 percent after the original March 1 deadline agreed to by Trump and Xi in December.

Another 43 percent advocated maintaining tariffs at 10 percent and delaying the increase for 60 days while negotiations continued, the chamber said at a briefing on its annual China business climate survey.

“There are mixed feelings about the tariffs, but a majority are in support of the tariffs continuing at the present time,” chamber chairman Tim Stratford said at the briefing.

“People don’t like tariffs, and that’s truly understandable. But they also think that maybe the tariffs have done some good in provoking very serious negotiations between the two sides,” Stratford told Reuters earlier.

“That figure is almost twice of what it was a year ago,” Beebe said.

The chamber said 19 percent of its companies were adjusting supply chains or seeking to source components and assembly outside of China as a result of tariffs. Twenty-eight percent were delaying or cancelling investment decisions in China.

Trump’s decision to delay the tariff increase has been greeted with a mixture of relief and dread among U.S. industry groups and lawmakers, many of which are increasingly fed up with what they say is China’s failure to live up to its World Trade Organization commitments.

In his Feb. 5 State of the Union address, Trump said a China trade deal “must include real, structural change to end unfair trade practices, reduce our chronic trade deficit, and protect American jobs.”

But as the March 1 deadline drew closer, Trump has appeared increasingly eager to make a deal, causing concerns among trade watchers that he was eroding U.S. Trade Representative Robert Lighthizer’s leverage in the talks.