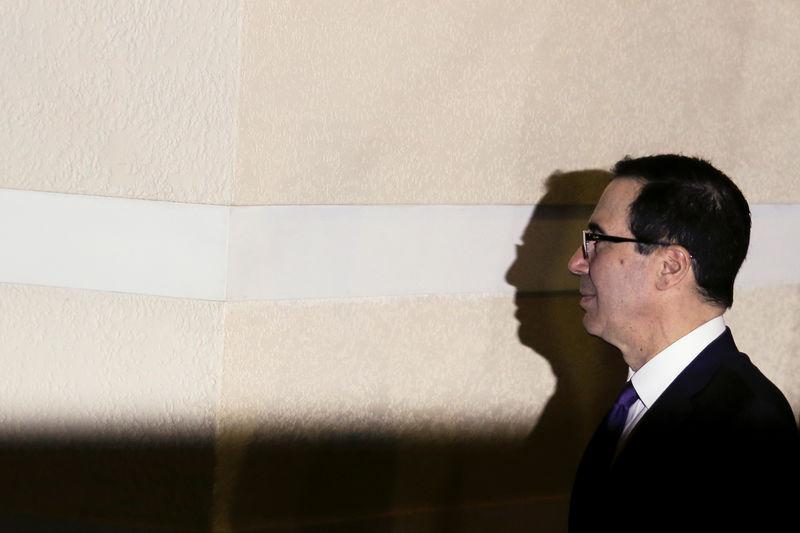 PARIS (Reuters) – The United States supports France’s call within the Group of Seven economic powers for a minimum level of corporate taxation, Treasury Secretary Steven Mnuchin said on Wednesday after meeting with the French finance minister in Paris.

France has said it will use its G7 presidency this year to push for an agreement on a minimum level of corporate taxation.

“We think it’s very important, the concept of minimum taxes, and that there isn’t a chase to the bottom on taxation,” he added.

France has also been leading a push at the EU level for tax on digital giants like Amazon (O:) and Facebook (O:), which Paris and many European countries view as able to unfairly reduce their tax bills by booking profits in the countries with the lowest tax rates.

With the EU unlikely to reach a deal in the face of opposition of countries like low-tax Ireland, France and some other EU countries are pushing ahead with plans for their own digital tax at the national level.

Mnuchin said that he was sympathetic to the issue, but considered it to be a broader problem than just digital companies that should be worked out at the Organisation for Economic Cooperation and Development.

Mnuchin’s visit to Paris comes as Washington is trying to win European support for its candidate to lead the World Bank, who is a critic of multilateral institutions and is a loyalist of President Donald Trump. [nL1N2011CX]

Le Maire added that it was important the World Bank continue to help the poorest countries and support the fight against climate change, and said that EU countries would work out a joint position on Malpass’ candidacy.

Malpass, who was present at the meeting, offered assurances that he would not reverse the bank’s work on fighting climate change.

“I expect the World Bank to continue its current course, which involves lending related to climate change,” Malpass told journalists.