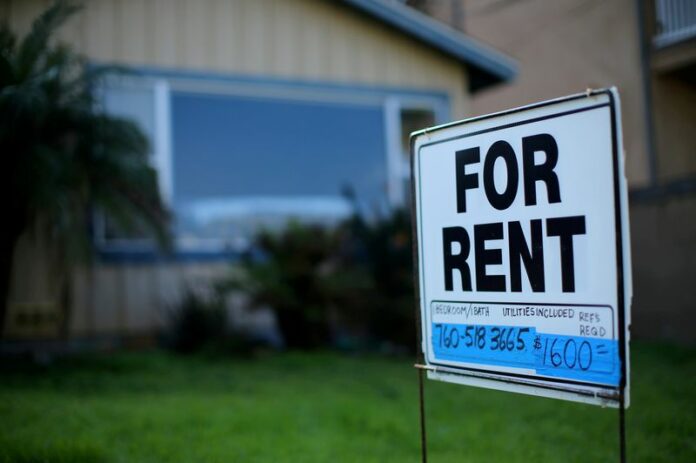 © Reuters. FILE PHOTO: A “For Rent” sign is posted outside a residential home in Carlsbad, California, U.S. on January 18, 2017. REUTERS/Mike Blake/File Photo

By Indradip Ghosh and Prerana Bhat

BENGALURU (Reuters) – Burning U.S. house price inflation will cool to 10%, half its current rate this year, and slow further over the next two as already very expensive homes and climbing mortgage rates sideline more prospective homebuyers, a Reuters poll found.

Supported by near-zero borrowing costs and a rush by existing homeowners to find more space, average U.S. house prices have soared by over one-third since the pandemic started. But that unexpected boom is petering out already.

The Federal Reserve has raised its key interest rate by a cumulative 75 basis points since March, with more expected this year and next, pushing up the key 30-year fixed mortgage rate above 5% in April and to its highest in more than a decade.

The May 10-30 poll of 28 property analysts showed U.S. house prices would rise 10.3% on an average this year based on the Case/Shiller index. That would be half their current pace of around 20%, the fastest since comparable records began in 2001.

“The rise in home prices has been staggering, and we do expect a significant slowdown going forward, particularly in the wake of a near-doubling of mortgage rates,” said Brad Hunter, head of consultancy Hunter Housing Economics.

“Young families are already struggling to find a single-family home they can afford, and the increase in mortgage rates will only worsen this problem.”

The U.S. housing outlook was better compared to some other markets, including Australia and New Zealand, where prices were predicted to fall modestly at some point over the coming three years after rising exponentially too. [AU/HOMES]

But the predicted increase in this year’s house prices was significantly higher than inflation and wage growth forecasts in a separate Reuters poll, meaning affordability is unlikely to improve anytime soon, especially for the first-time homebuyers. [ECILT/US]

Indeed, nearly 90% of analysts, 26 of 29, who answered a separate question said affordability for first-time homebuyers would either worsen or significantly worsen over the next two years. Only three said it would improve.

With consumer inflation at around a four-decade high and rising interest rates and 30-year mortgage rates, housing market activity has already slowed sharply.

“Millennials have not seen the 30-year above 5% for more than a month in their adult lives,” said Matthew Gardner, chief economist at Windermere Real Estate.

“The impact of higher rates will lower sales and new housing starts, and price growth…will slow.”

Meanwhile, existing home sales, which make up about 90% of total sales and declined to a near two-year low of 5.61 million units last month, was predicted to fall further to reach 5.34 million units by the second quarter of next year.

(For other stories from the Reuters quarterly housing market polls:)