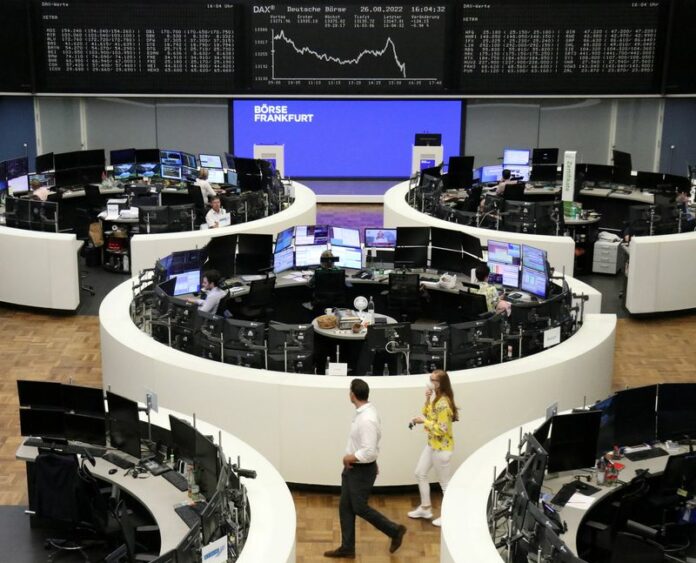 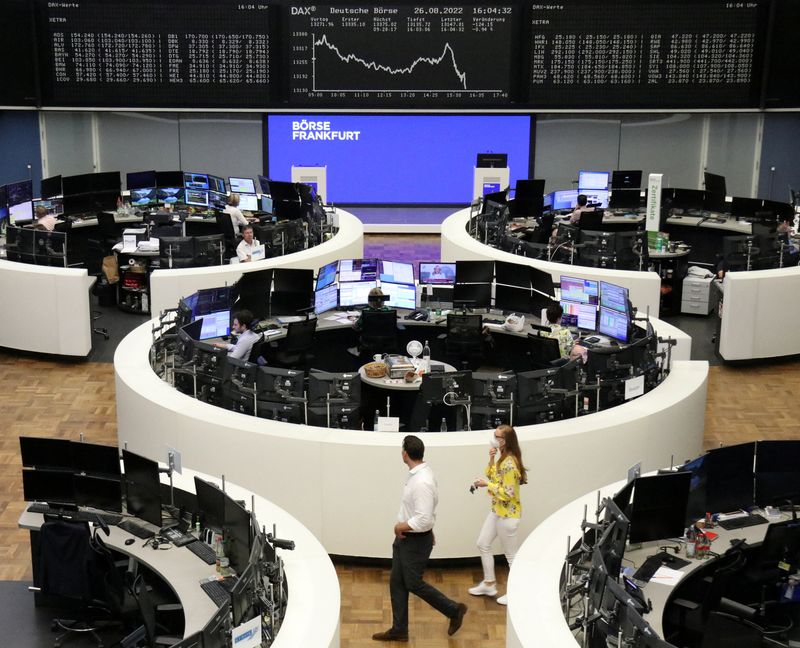 (Reuters) – European shares dropped on Monday, with technology stocks leading declines, while bond yields surged as comments from central bankers heightened fears of aggressive measures to stamp out inflation amid rising risks of a recession. The STOXX 600 index fell 0.8% to a more than one-month low, with interest rate-sensitive tech stocks tumbling 2.4%. Germany’s 10-year yield rose 10 basis points (bps) to a two-month high. European Central Bank (ECB) board member Isabel Schnabel warned over the weekend that central banks must act forcefully to combat inflation, even if that dragged economies into recession, while governing council member Francois Villeroy and policymaker Martins Kazaks also signalled another big rate step in September. Their comments followed Federal Reserve Chair Jerome Powell’s warning on Friday that the U.S. central bank would raise rates as high as needed to restrict growth and keep them there “for some time”.

Markets are pricing in a two-thirds chance that the ECB could hike rates by 75 bps in September, up from 24% last week.

“The ECB rate decision will show that the current inflation narrative will force them to deliver massive rate hikes that will kill growth,” said Edward Moya, senior market analyst at OANDA.

Flash August consumer price index numbers due on Wednesday are likely to show that inflation in the euro area remains uncomfortably high.

“Neither Schnabel nor Villeroy said what they will favour at the next meeting – they may want to see inflation data for August and the ECB’s revised economic forecasts before deciding,” said Andrew Kenningham, chief Europe economist at Capital Economics.

The volatility gauge for euro-zone stocks, dubbed “Europe’s fear index”, jumped to a six-week high of 29.4.

Stocks are set for a nearly 3% drop over just the last two sessions, as the combination of big rate hikes to cool rampant inflation, a looming recession and an energy crunch weighs on sentiment.

After nearly retracing June’s sell-off last month, the STOXX has shed almost 4% so far in August.

Among stocks, Uniper requested more financial help from the German government, raising the bill for bailing out the utility group to an eye-watering 19 billion euros ($19 billion), as soaring gas and power prices burn up its cash reserves. Shares of the company rose 3.0%.

Real estate stocks, among sectors viewed as “defensive” or safer bets during times of economic uncertainty, saw the slimmest losses amid a broad-based STOXX 600 selloff. Markets in Britain were closed on Monday for a holiday.