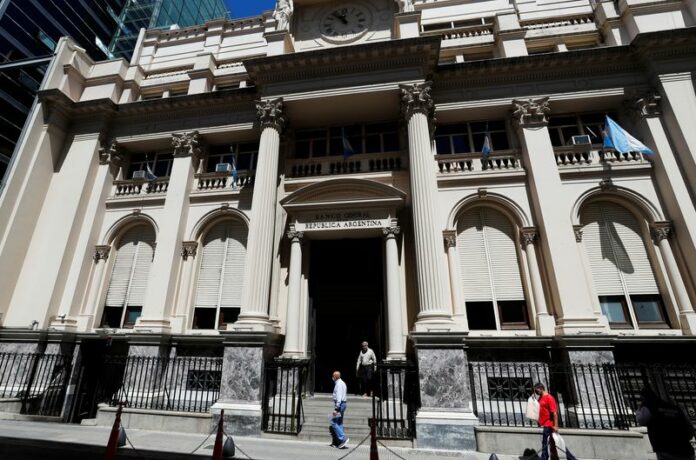 © Reuters. The facade of Argentina’s Central Bank is pictured in the financial district of Buenos Aires, Argentina December 7, 2021. REUTERS/Agustin Marcarian

BUENOS AIRES (Reuters) -Argentina’s central bank is set to hold the benchmark interest rate steady at 75%, which would snap a tightening cycle since the start of the year, two sources said, with the entity hopeful that monthly inflation will slow in the months ahead.

The bank had been mulling another potential hike after successive increases each month this year to counter inflation that is set to end 2022 at over 100% and that is hurting ordinary Argentines, hitting savings and economic growth.

However, the directors were unable to reach a unanimous decision over a new hike with concerns about the economic impact of higher rates, one source, an adviser to the bank, told Reuters, asking not to be named as the discussions were private.

“There was no consensus (among the board) to increase the rate because it is certain that inflation will go down in the coming months,” the source said.

A second source with direct knowledge of discussions said the benchmark rate would for now remain unchanged. The bank’s monetary policymakers meet weekly.

Argentina’s monthly inflation in September came in at 6.2%, the official statistics agency said late on Friday, undershooting forecasts of a 6.7% rise and down from a peak of 7.4% in July. Annualized inflation was 83%.

The adviser said at least two directors had been opposed to a new hike. The bank has six directors who make key decisions, along with the president and two vice presidents. Normally decisions are made by consensus.

“Neither today nor yesterday is the rate issue on the agenda,” a central bank spokesman said, adding that money policy decisions were voted on by the entire board. “The tradition is that everything comes out by consensus.”

The directors are hopeful that rises in the monthly consumer price index (CPI) will slow towards 6% in the remaining months of the year, the adviser said. There were concerns more hikes to the benchmark ‘Leliq’ rate would feed a “quasi-fiscal deficit” and make credit even more expensive, hurting growth.

The benchmark rate had been 38% at the end of last year.

In the region, Chile and Brazil have also been signaling an end to tightening cycles, with signals of inflation having peaked, though Argentina remains an outlier with one of the highest inflation levels in the world.