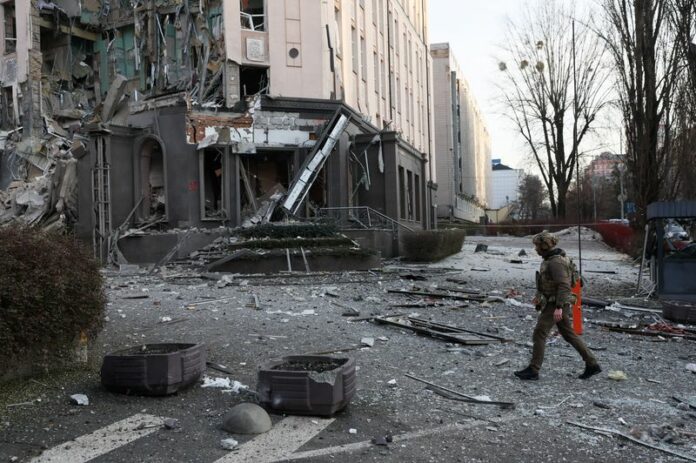 Missile strikes on Ukraine kill one, Zelenskiy says Russians in league with the devil 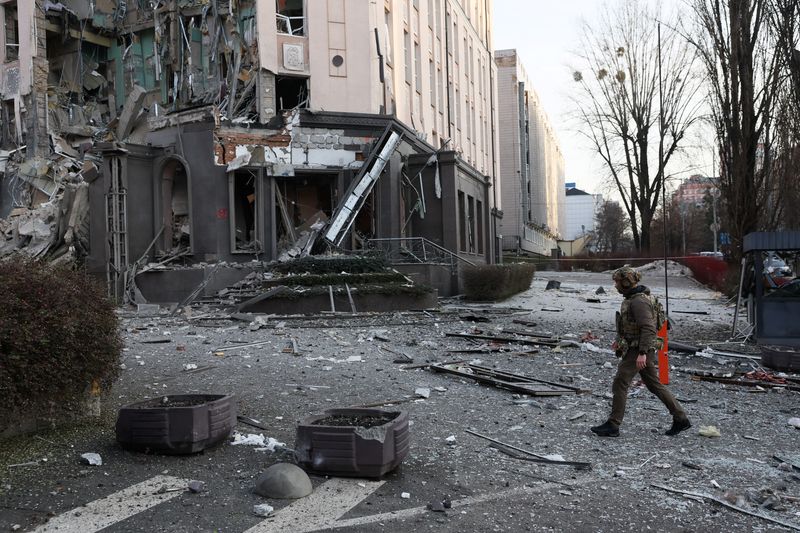 © Reuters. A member of the military walks at the site of a building damaged during a Russian missile strike, amid Russia’s attack on Ukraine, in Kyiv, Ukraine December 31, 2022. REUTERS/Gleb Garanich

By Dan Peleschuk and Olena Harmash

KYIV (Reuters) – Russia fired more than 20 cruise missiles at targets in Ukraine on Saturday, killing at least one person in Kyiv, in attacks President Volodymyr Zelenskiy said showed Moscow was in league with the devil.

The second barrage of major Russian missile attacks in three days badly damaged a Kyiv hotel and a residential building. Energy Minister German Galushchenko on Facebook (NASDAQ:META) said the strikes had not caused serious damage to the national power system.

Russia has been attacking vital Ukraine infrastructure since October with barrages of missile and drones, causing sweeping power blackouts as the cold weather bites.

Zelenskiy speaking in a video address noted that Russia had also launched attacks at Easter and Christmas.

“They call themselves Christians … but they are for the devil. They are for him and with him,” he said.

At least a dozen people were injured in the attacks. A Japanese journalist was among the wounded and taken to a hospital, Kyiv mayor Vitali Klitschko said.

Army chief Valeriy Zaluzhnyi said air defences shot down 12 incoming cruise missiles, including six around the Kyiv region, five in the Zhytomyrskiy region and one in the Khmeltnytskiy region.

The cruise missiles had been launched from strategic bombers over the Caspian Sea hundreds of miles away and from land-based launchers, he said on Telegram.

Other cities across Ukraine also came under fire. In the southern region of Mykolaiv, local governor Vitaliy Kim on television said that six people had been wounded.

Kim in a separate post on Telegram said Russia had targeted civilians with the strikes, something Moscow has previously denied.

“According to today’s tendencies, the occupiers are striking not just critical (infrastructure) … in many cities (they are targeting) simply residential areas, hotels, garages, roads.”

In the western city of Khmelnytskyi, two people were wounded in a drone attack, Ukrainian presidential aide Kyrylo Tymoshenko said. He also reported a strike in the southern industrial city of Zaporizhzhia, which Tymoshenko said had damaged residential buildings.

Ukraine’s defence ministry responded on Telegram by saying: “With each new missile attack on civilian infrastructure, more and more Ukrainians are convinced of the need to fight until the complete collapse of Putin’s regime.”

Curfews ranging from 7 p.m. to midnight remained in place across Ukraine, making celebrations for the start of 2023 impossible in public spaces.