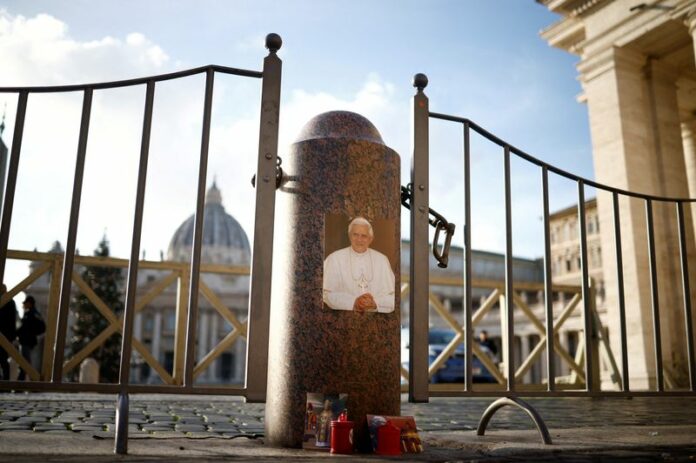 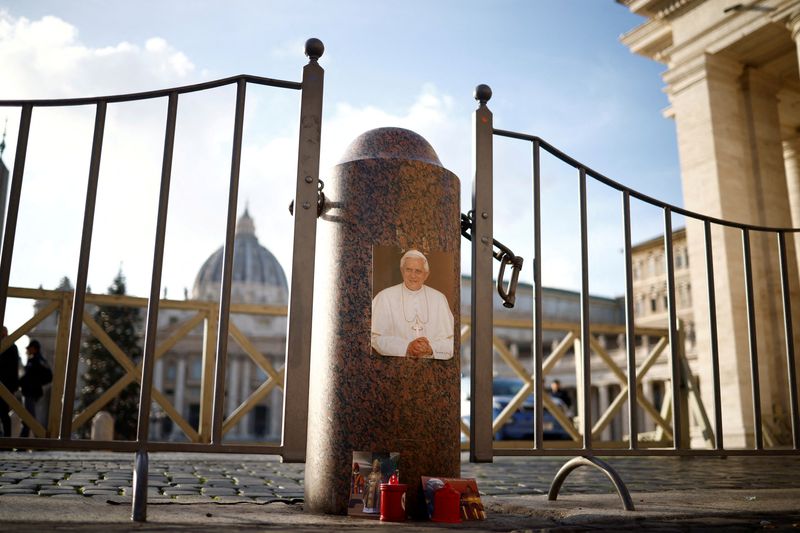 VATICAN CITY (Reuters) -Pope Francis marked the Roman Catholic Church’s traditional World Day of Peace on Sunday but the start of the new year at the Vatican was overshadowed by the death of his predecessor, Benedict.

Francis presided at a Mass in St. Peter’s Basilica as the body of Benedict, who died on Saturday at the age of 95, was being prepared for three days of public viewing in the same church starting Monday.

On Sunday the Vatican released the first images of the late Benedict, showing him dressed in red and gold liturgical vestments and laying in state in the chapel of the monastery where he died.

His body will be moved privately to the basilica, unlike what followed the death in 2005 of Pope John Paul, whose body was moved in a solemn outdoor procession that was televised live around the world.

In accordance with Benedict’s wishes, his funeral on Thursday will be simple and solemn. It will be the first time in many centuries that a sitting pope will preside at the funeral of his predecessor. Benedict, who stepped down in 2013, had been the first pontiff in 600 years to resign.

Jan. 1 is also the feast of the Mother of God and in his homily, Francis asked the Madonna to accompany “our beloved” Pope Emeritus Benedict “on his passage from this world to God”.

Benedict was also remembered in one of the prayers at the Mass.

In his homily, Francis urged his listeners to work actively for peace, and not “waste time glued to a keyboard in front of a computer screen” but to “dirty our hands and to do some good”.

Later at his Sunday blessing in St. Peter’s Square, Francis made another appeal for an end to the conflict in Ukraine, saying it was “intolerable contrast” with the theme of the day.

PRAISE, BUT ALSO CRITICISM FOR BENEDICT

On Saturday night the Vatican released Benedict’s two-page “spiritual testimony” written in 2006, a year after his election as pope. There was no explanation why Benedict did not update it as he became older and more frail.

In it, he asked in a general, spiritual way, that God would welcome him to internal life “despite all my sins and insufficiencies”.

Francis on Saturday called Benedict a noble, kind man who was a gift to the Church and the world.

While tributes to the former pope continued to be made by world leaders, and conservative members of the faithful, others were highly critical of his pontificate.

Some recalled the severe discipline he meted out to progressive theologians, particularly in Latin America, when he was head of the Vatican’s doctrinal department under Pope John Paul II. Those actions prompted liberal Catholics to dub then Cardinal Joseph Ratzinger “God’s Rottweiler”.

And while some have credited Benedict with taking important steps to formalise the Vatican’s response to clergy sexual abuse, victims groups accused him of protecting the institution at all costs.

“In our view, the death of Pope Benedict XVI is a reminder that, much like John Paul II, Benedict was more concerned about the Church’s deteriorating image and financial flow to the hierarchy versus grasping the concept of true apologies followed by true amends to victims of abuse,” the anti-abuse group SNAP said.

Like many Vatican officials who worked with Benedict, Canadian Cardinal Marc Ouellet said he believed the German pontiff had left behind “a great legacy” as a man of God and a man of culture.

“I believe this is also a task for the future, to deeply rethink the Christian faith in the face of the challenges of our time,” Ouellet told Reuters.