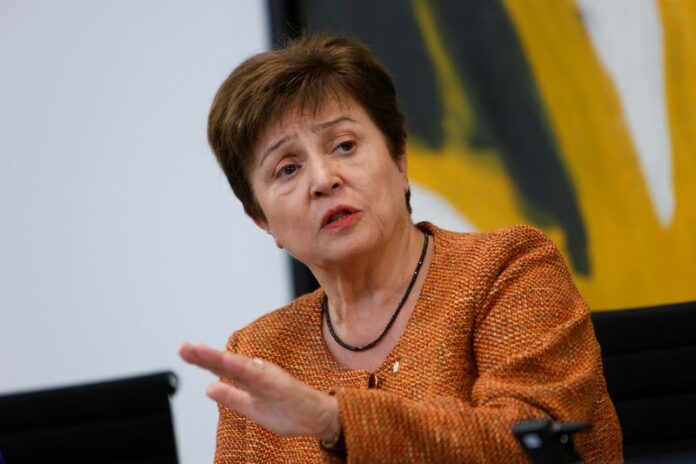 (Reuters) -For much of the global economy, 2023 is going to be a tough year as the main engines of global growth – the United States, Europe and China – all experience weakening activity, the head of the International Monetary Fund said on Sunday.

The new year is going to be “tougher than the year we leave behind,” IMF Managing Director Kristalina Georgieva said on the CBS Sunday morning news program “Face the Nation.”

“Why? Because the three main economies – the U.S., EU and China – are all slowing down simultaneously,” she said.

In October, the IMF cut its outlook for global economic growth in 2023, reflecting the continuing drag from the war in Ukraine as well as inflation pressures and the high interest rates engineered by central banks like the U.S. Federal Reserve aimed at bringing those price pressures to heel.

Since then, China has scrapped its zero-COVID policy and embarked on a chaotic reopening of its economy, though consumers there remain wary as coronavirus cases surge. In his first public comments since the change in policy, President Xi Jinping on Saturday called in a New Year’s address for more effort and unity as China enters a “new phase.”

“For the first time in 40 years, China’s growth in 2022 is likely to be at or below global growth,” Georgieva said.

Moreover, a “bushfire” of expected COVID infections there in the months ahead are likely to further hit its economy this year and drag on both regional and global growth, said Georgieva, who traveled to China on IMF business late last month.

“I was in China last week, in a bubble in a city where there is zero COVID,” she said. “But that is not going to last once people start traveling.”