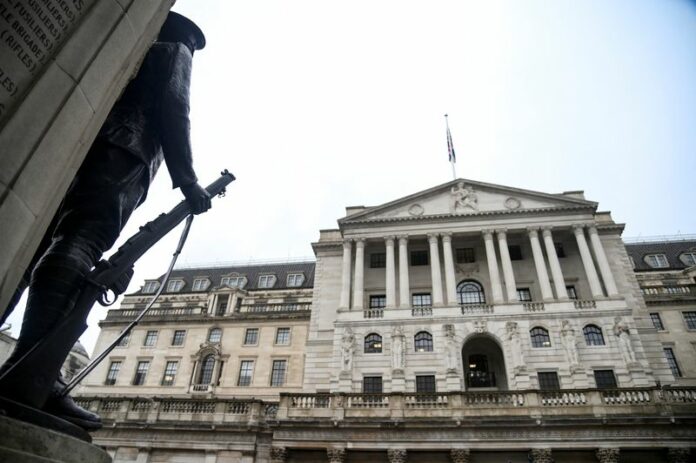 LONDON (Reuters) -Bank of England Chief Economist Huw Pill said on Monday that Britain is at risk of persistent inflationary pressure from a tight labour market, even if natural gas prices stabilise or fall, implying further rate rises may be needed.

Pill’s speech – the first on monetary policy this year by a BoE official – comes as economists and markets speculate about how near the BoE is to the end of its rate-rising cycle.

“The distinctive context that prevails in the UK – of higher natural gas prices with a tight labour market, adverse labour supply developments and goods market bottlenecks – creates the potential for inflation to prove more persistent,” Pill said in a speech to be delivered in New York later on Monday.

“(This) will strongly influence my monetary policy position in the coming months,” he added in a text the BoE released ahead of a speech he plans to give to the Money Market Association of New York University.

The BoE raised its main interest rate to 3.5% in December, up from 0.1% a year before, and financial markets expect the central bank to raise rates again to 4% at its next policy announcement on Feb. 2.

Markets see BoE rates peaking at 4.5% in June, while economists polled by Reuters in December predicted a peak of 4.25% in the second quarter of 2023.

Inflation has fallen slightly from a 41-year peak of 11.1% in October, and Britain’s economy appears to be entering a shallow recession.

Pill said Britain was “starting to see labour market indicators turn” as job vacancies fell from record levels and unemployment, which had been at its lowest since the 1970s, edged higher.

The BoE also forecast headline inflation will fall this year as natural gas prices level off. Natural gas prices in Britain, which spiked in response to Russia’s invasion of Ukraine last February, have retreated to around the same level as a year ago, but are several times higher than in early 2021.

Pill said that even if natural gas prices eased further, that would not guarantee that underlying price pressures would fall enough for inflation to return to its 2% target.

Britain faces labour shortages following a fall in the number of older workers since the COVID-19 pandemic and greater difficulties for employers to recruit from abroad at short notice due to post-Brexit changes to rules on work visas.

Businesses and workers needed to accept lower inflation-adjusted profit margins and wages than before the energy shock, Pill said.

Britain faces a wave of strikes as trade unions seek to minimise the impact of inflation on their members’ pay, and Pill said Brexit meant some British companies faced reduced competition.

If businesses and workers did not pursue moderate price and wage strategies, Pill said the BoE would have to keep raising rates.

“What the Bank can do, and indeed must do … is ensure that any self-sustaining momentum in inflation at rates above the 2% target is squeezed out of the system by constraining demand relative to supply as necessary,” Pill said.

Weekly Comic: Adani’s woes are an opportunity for India

Weekly Comic: Adani’s woes are an opportunity for India