French pension reforms and the protests they faced 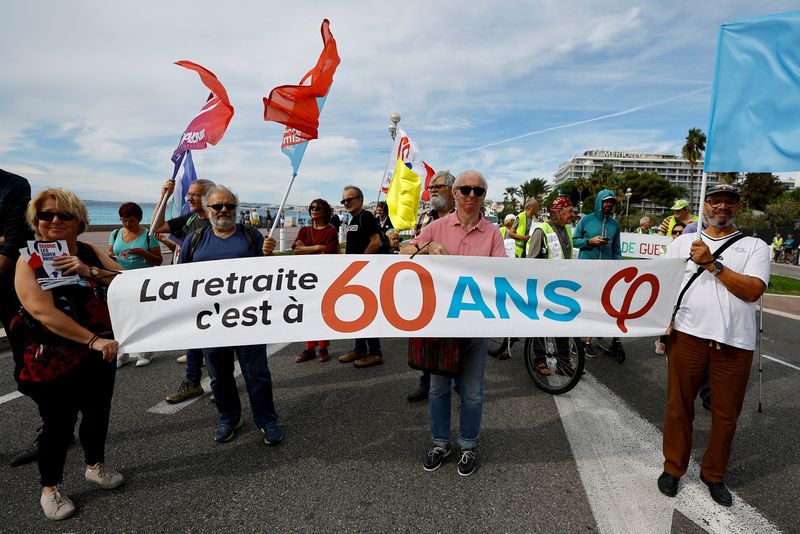 © Reuters. FILE PHOTO: Protestors hold a banner which reads “Retirement is at 60” during a demonstration as part of a nationwide day of strike and protests to push for government measures to address inflation, workers’ rights and pension reforms, in Nice, France, Se

PARIS (Reuters) – French President Emmanuel Macron’s government will unveil on Tuesday the details of a pension reform which unions have already said they would take to the streets to oppose.

Here is a timeline of past efforts to push through – and oppose – pension reforms in France and how that panned out:

Emmanuel Macron started out his first presidential mandate with plans to completely overhaul the pension system and change it to a universal points-based system.

Following mass protests in 2020 he shelved the reform as COVID-19 hit, saying a global health pandemic was not the time for such reforms.

Despite protest rallies, Socialist President Francois Hollande enacted a reform that changed how many years you need to work to have a full pension – it would be progressively increased to 43 years by 2035. To mitigate this, those with tough, physically demanding jobs retire earlier.

Conservative president Nicolas Sarkozy moved the retirement age to 62 from 60, with full pension only for those who have worked at least 41.5 years. Major protests saw millions take to the streets, but the reform went through.

Conservative President Jacques Chirac and Prime Minister Alain Juppe abandoned plans to do away with France’s many sectoral pension systems and increase the retirement age for civil servants following three weeks of strikes, in what were the country’s toughest social protests since May 1968.

Socialist President Francois Mitterand brings down the retirement age to 60 from 65.