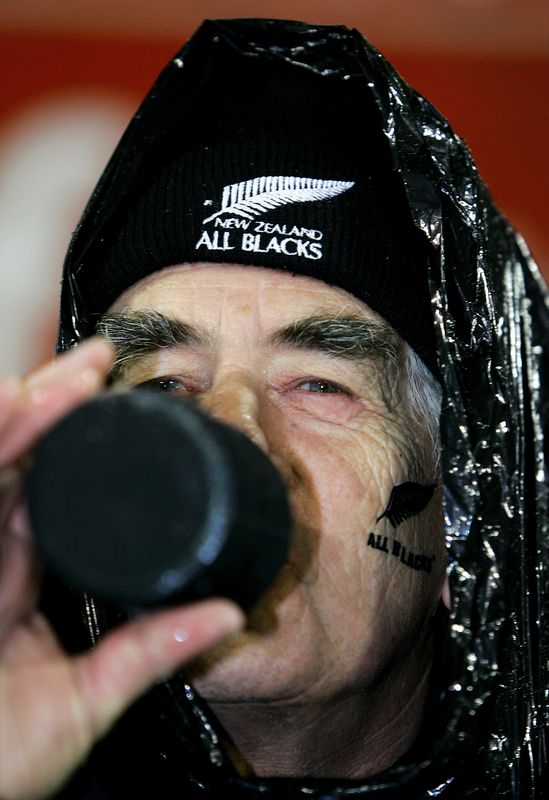 © Reuters. An All Black supporter drinks a beer as he sits in the rain before the first test against the British and Irish Lions at Jade Stadium in Christchurch June 25, 2005. REUTERS/David Gray

(Reuters) – New Zealand supplies of carbon dioxide (CO2), used to fizz drinks and in packaging and hospitals, are having to be rationed because of shortages following the closure of the country’s only food-grade CO2 production facility.

Industrial gas producer BOC said in an email it is prioritising supplies of CO2 to critical medical, safety and water customers and rationing is in place.

“We are working collaboratively with suppliers, customers and other industry stakeholders to manage the CO2 supply situation,” it added.

The rationing is the result of the shut down of a CO2 production facility on west coast of the North Island. Todd Energy, which runs the facility, said in a statement it had to be closed while a plant safety issue was investigated.

“The safe operation of the plant is our priority. Unfortunately, that means the plant is temporarily closed while we work through engineering solutions,” said Todd Energy chief executive Mark Macfarlane.

Supplies of CO2 were already tight prior to the plant being shut down after the country’s other plant closed following the decommissioning of New Zealand’s only refinery in April 2022. To try to fill that gap, CO2 imports almost tripled last year, according to Statistics New Zealand data.

Dylan Firth, executive director of the Brewers Association said the industry, worth around NZ$2.8 billion ($1.8 billion)annually, had been having to ration for some time. Some smaller brewers had limited stocks of C02 and a number were expecting to have stop production if the supply issues weren’t sorted, he said.

Steve Kermode, managing director of contract craft beer brewing company Steam Brewing, said it was and facing soaring costs for imported CO2 that it couldn’t pass onto customers and had at times shut down production because of the shortages.

“This is an absolute nightmare,” he said. Steam Brewing is investing in new technology to capture CO2 produced in the brewing process so it can be reused. However, this will only produce around 25% of the CO2 the company normally uses.