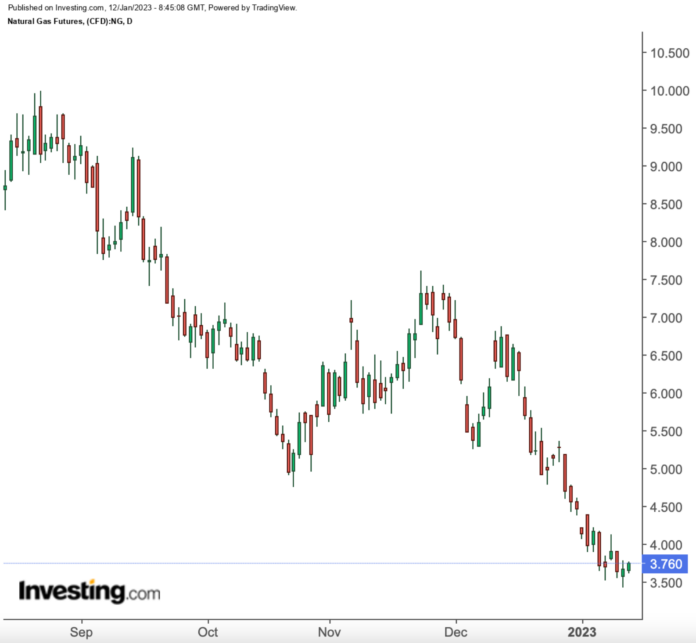 Natural Gas: Will $3 Support Give Way to Merciless Winter Warmth?

Hope appears to have become an exercise in futility for gas bulls, with 50% of market value erased in 4 weeks
‘King Weather’ suggests $3 support for US gas could be broken next
Still, technicals assign little chance now of visiting $2 levels last seen in May 2021

Since December began, hope has been an exercise in futility for natural gas bulls. With almost 50% of the market’s value erased in just four weeks and one support after another being taken out, the time has come to ask if the $3 level can hold.

It’s incredible how we had gotten here and how quickly too.

Just in August, gas futures on the New York Mercantile Exchange’s Henry Hub were at 14-year highs of $10 per mmBtu, or million metric British thermal units. Even with December’s meltdown, the hub’s front-month contract managed to pop above $7 at one point.

Since then, the sheer intensity of the downside — with 25- to 45-cent drops becoming acceptable daily occurrences — has raised questions on where it might end.

The answer, of course, lies within the cold and warm temperatures playing out across the United States, as the weather is king in this market.

After explosive upward price action for most of 2022 from weather extremities and a supply squeeze caused by political and other disruptions to Russian gas output in the aftermath of the Ukraine invasion, natural gas futures suddenly collapsed last month. The change has primarily been attributed to unseasonably warm winter temperatures that have left the US and European heating markets sufficiently supplied.

Exports of LNG, or liquefied natural gas, have also been tamped down since June with the shutdown of the Freeport liquefaction facility in Texas, which has idled about 2 bcf, or billion cubic feet, of gas per day. That is independent of what’s happening on the weather front.

And what weather forecasters are saying isn’t what gas bulls want to hear.

Other than a transient burst of chilly temperatures aimed at the Southeast region of the United States this coming weekend, overall mild temperatures don’t look to change until at least January 22. That’s the consensus of forecasters.

That means it will be another ten days before the longer-range weather models expect a resumption of the bitterly cold Arctic winds that are typical at this time of the year. Once in place, the continuation of that winter weather may linger well into February throughout the central and eastern regions of the country.

But we must cross ten days before getting to those “real winter” conditions. And ten days is an awfully long time in a merciless market like natty, which is the pet name for the trade.

At each stage of its crumble — from $7 to below $6, then under $5 and sub-$4 — gas longs on the Henry Hub had prayed for the situation to reverse. However, as said at the outset, it has been an exercise in futility thus far due to the weather. The start of the 2022/23 winter season has been marked by abnormally high temperatures, with the daily average over the past week at around 55-45 degrees Fahrenheit (13 to 7 Celsius) as opposed to the 35-25 degree Fahrenheit range (around 2 to -2 Celsius) common for this time of year.

This January “is on pace to be among the warmest in nearly two decades,” Eli Rubin, senior analyst at EBW AnalyticsGroup, said in comments carried by naturalgasintel.com.

On a seasonal basis, temperatures were “scorching,” and the “extent of near-term warming has slashed seasonal supply adequacy fears and [US gas] risk premiums may struggle” more in coming days, Rubin warned.

A somewhat similar situation is playing out across Europe, where early fall-like temperatures (some outrightly call them summer conditions) are running riot across the continent, capping European gas prices on the Netherlands’ TTF point at $21-$24 per mmBtu lately — a far cry from the $80-$100 range seen during the 2022 summer.

Back to US gas pricing: Will the $3 support be defended? Or will we see $2 levels, which had not been witnessed since May 2021, some 20 months ago?

At the current rate of attrition, the 77-cent buffer — which currently holds the psychological $3 support — could get wiped out by Friday.

But the weather isn’t the only determinant for gas prices. Chart-based trading is also a factor, though not as much as in oil and other energy-based commodities.

Technicals can accentuate or skew a trading trend already in place in gas. But there are also occasions when technicals break out on their own, particularly when a trend is a near exhaustion. After four weeks of selling, many think gas may have reached that point.

Based on current chart patterns in US gas, the bulls may actually be in luck, as several support points appear to hold the market at above $3, says Sunil Kumar Dixit, chief technical strategist at SKCharting.com.

“The probability for $2 pricing is quite low for now, from a technical perspective. At the most, I see the current bearish streak extending to the 100-Month Simple Moving Average of $3.29, if we take another leg lower from Wednesday’s low of $3.42.

Also, amid the deep red trading conditions on the Henry Hub, market participants are bracing for another weekly update from the US Energy Information Administration on inventories in the national gas storage.

Gas storage numbers over the past two weeks have shown withdrawals exceeding 200 bcf each week. While under normal circumstances, that would be considered rather bullish, draw expectations have also been set higher this winter due to abnormally warm temperatures.

Gelber & Associates, a Houston-based energy trading consultancy, said in a note on Wednesday to its clients in natural gas:

“Once the calendar reaches the middle of the winter season and gas storage inventories are well situated and supplied, it [will] become evident that there will not likely be a storage crunch and any upward trajectory in prices, even in the midst of lots of Polar-chilled air, [will] start to wane.”