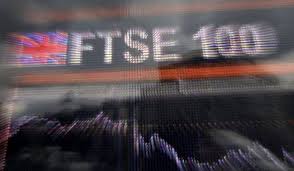 Britain’s FTSE falls for fifth session in a row

LONDON: Britain’s top share index fell for the fifth session in a row on Monday, weighed down by media group Pearson and commodity stocks which pushed the market towards six-month lows reached last week.

Pearson fell 4.8 percent, the worst performing FTSE 100 stock in percentage terms, after several brokers cut their price targets on the company, which also announced talks to sell its 50 percent stake in the Economist magazine.

Fears for economic growth in China, the world’s biggest metals and energy consumer, have hit mining stocks and oil prices, with commodity stocks accounting for more than 20 percent of the FTSE’s market capitalisation.

This in turn pushed down shares in BP and Royal Dutch Shell.

“The pressure on crude oil is taking its toll on the market, given its exposure to the sector.

I don’t see this downward pressure relenting for the time being,” said Beaufort Securities sales trader Basil Petrides. Merlin Entertainments dropped 4.3 percent after a profit warning, having at one stage been 7.8 percent lower.

However, consumer goods maker Reckitt Benckiser rose 1.4 percent after increasing revenue and margin targets. The FTSE hit a record 7,122.74 points in April but is now nearly 10 percent below that high, and down 1 percent in the year to date.