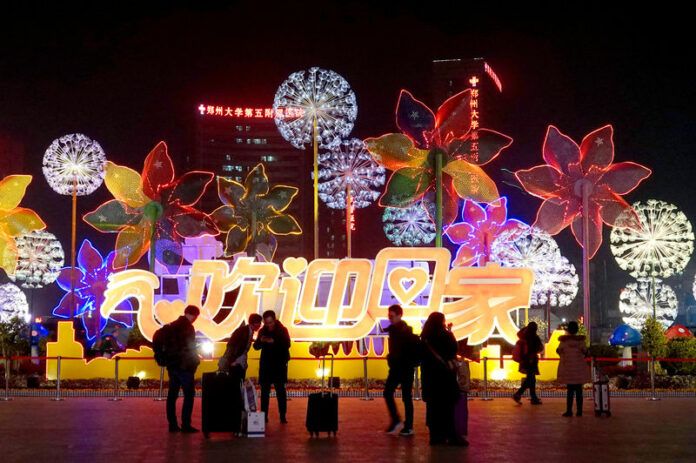 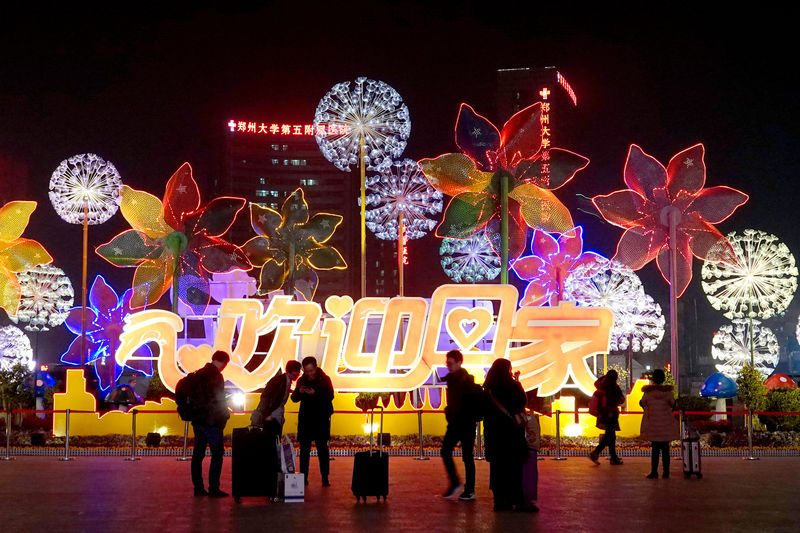 © Reuters. People are seen by an installation with Chinese characters reading, “Welcome Home”, at the Zhengzhou Railway Station during the Spring Festival travel rush ahead of Chinese Lunar New Year

SHANGHAI (Reuters) – Trade tensions with the United States and a slowing economy are keeping Chinese tourists to budget-friendly destinations closer to home for the Lunar New Year holiday, with more likely opting for Bangkok than Sydney or San Francisco.

The week-long holiday, which takes place this year in the first week of February, is one of China’s longest breaks and over 400 million people are expected to travel across the country for family reunions, according to Chinese travel agency Ctrip. It estimates 7 million will go abroad.

Hotels and travel agencies in Asian countries from Thailand to Japan anticipate higher numbers than a year ago of Chinese tourists, who have become a powerful spending force with the ability to make, or break, the fortunes of retailers and tourism brands.

But recently, the numbers going to the United States, Australia and New Zealand have fallen or only show small increases.

In 2018, the Chinese economy grew at its slowest rate in nearly three decades, and economists expect a further decline this year, in part because of weakening consumer spending.

He Yanping, 26, who works in advertising in Beijing, was among those not venturing too far overseas for Lunar New Year, with an 11-day Malaysia holiday she estimates will cost between 8,000 to 10,000 yuan.

“I actually wanted to go to Australia but the problem is that it’s too far, and the hotels and visa are expensive,” she said.

Ctrip said bookings indicated the four most popular destinations are Thailand, Japan, Indonesia and Singapore, all within in seven-hours flying time from Beijing or Shanghai.

Incoming flights are full, said Ida Bagus Agung Partha Adnyana, chairman of the Bali Tourism Board, which represents the industry on the popular Indonesian holiday. “We are optimistic that bookings will be at least the same (as 2018).”

The Thai Hotels Association said bookings from China, which tumbled after 47 Chinese tourists died when a boat sank near Phuket in July, were back to normal levels.

Chinese outbound travel to the United States has seen a significant slowing since trade frictions between Beijing and Washington began escalating.

In July-September, such arrivals fell 20 percent from a year earlier, according to the private China Outbound Tourism Research Institute, which analyses Chinese travel data.

“For every citizen, it became clear that it is not politically correct at this moment in time to travel to the USA, especially for leisure,” an institute spokesman said.

The outlook for Australia and New Zealand, in previous years popular during their summers, is also less rosy.

In November, Chinese arrivals in New Zealand were 4.4 percent below a year earlier, and in Australia they just 1.6 percent higher.

Air New Zealand on Wednesday lowered its profit outlook and forecast revenue growth would ease due to weaker tourism.

Du Ge, a sales director at Beijing Xinjie International Travel Service which organizes tours to New Zealand and Australia, said bookings ahead of the Lunar New Year holiday have been weak, which he attributed to the economic climate.

“Tourism is considered a luxury, something to have after your stomach is full. But as people’s disposable incomes fall, tourism will be impacted.”