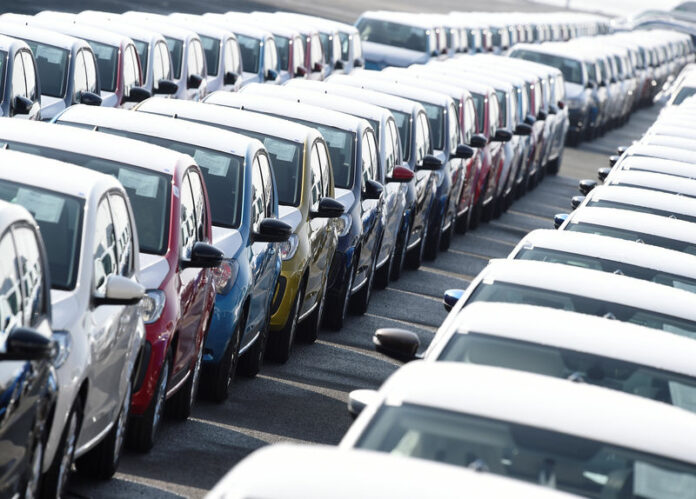 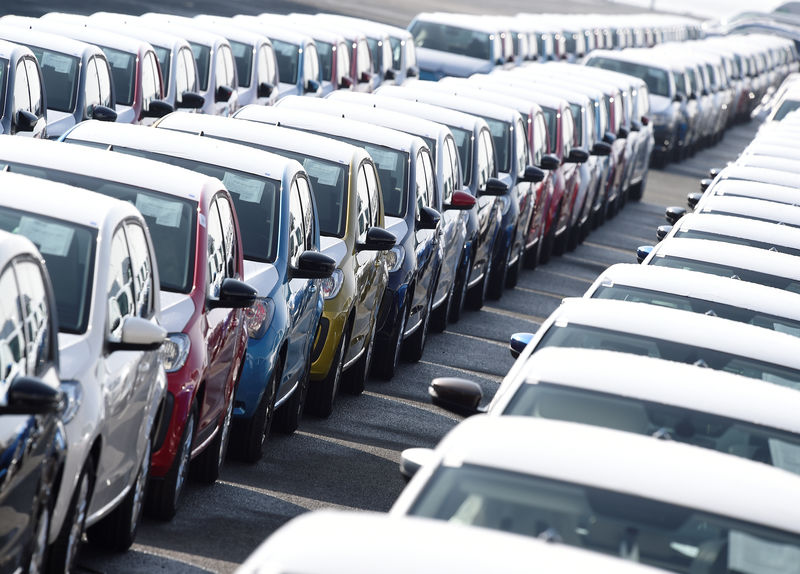 © Reuters. FILE PHOTO: Volkswagen export cars are seen in the port of Emden

BERLIN (Reuters) – Germany faces the risk of steep U.S. tariffs on cars and a no-deal Brexit, a double whammy which could bring a golden decade of growth in Europe’s powerhouse economy to an end.

Chancellor Angela Merkel and her ministers are working behind the scenes to mitigate the impact should the worst-case scenario come to pass.

A stagnating German economy or even a recession would hold back the euro zone as a whole and cast uncertainty over the European Central Bank’s planned exit from its loose monetary policy.

The Berlin government is already facing a budget shortfall of up to 25 billion euros by 2023 as the economic slowdown means tax revenues will come in below previous estimates, according to a finance ministry document.

Nonetheless, faced with the threat of a recession, Finance Minister Olaf Scholz is prepared to bend Germany’s strict debt rules, a senior government official told Reuters on condition of anonymity.

“If the double whammy should materialize, we want to pull something out of the hat,” the official said, suggesting that the government is working on a fiscal stimulus package.

“This will be a test to our policy of no new debt and Germany’s debt brake,” the official added.

Germany, which barely avoided a recession last year, is especially vulnerable to both the risks of U.S. tariffs of up to 25 percent on cars and Britain sliding out of the EU on March 29 without a deal to govern future trade relations with the bloc.

Exports make up nearly half of its economic output and cars are by far its main export with annual sales worth 230 billion euros ($263 billion), data from the Federal Statistics Office showed.

The most important export destination for German cars last year was the United States with revenues of 27.2 billion euros, followed by China with 24.7 billion euros and Britain with 22.5 billion euros, the data showed.

In terms of the number of exported cars, Britain tops the list with 666,000 and the United States is second with 470,000, according to data from the VDA industry association.

U.S. President Donald Trump, pursuing an “America First” agenda, has repeatedly criticized Germany’s bumper trade surplus and warned that Washington will impose tariffs on European cars if it is unable to reach a trade deal with the European Union.

A confidential report by the U.S. Commerce Department sent to Trump in mid-February is widely expected to pave the way to impose duties on imported autos and auto parts by designating them a threat to American national security.

Trump had 90 days to decide whether to act upon the recommendations, until mid-May.

A no-deal Brexit, meanwhile, would see Britain falling back to the status of a third country under the rules of the World Trade Organisation (WTO).

This would push up British import tariffs for German cars to roughly 10 percent. For trucks and pick-ups, tariffs of up to 22 percent would apply. Customs inspections at ports and borders are likely to disrupt just-in-time delivery chains.

“A no-deal scenario would be serious and entail significant risks for companies and employees in the EU-27,” a VDA spokesman said. “Massive impairments in logistics and high customs costs would be the result.”

If both scenarios become reality, the combined impact could chop off up to 0.7 percentage points from Germany’s gross domestic product (GDP) growth in the long term, separate estimates from Commerzbank (DE:) and the Ifo institute show.

The German government already expects GDP growth to slow to 1 percent this year from 1.4 percent in 2018. But this forecast is built on the assumption that an escalation of the U.S. trade dispute and a no-deal Brexit can be avoided.

“In case of a disorderly Brexit, there will be short-term negative effects such as increased uncertainty and adjustment processes, though these are hard to quantify,” an economy ministry spokesman said.

However, studies estimate that a no-deal Brexit would cost Germany 0.2 percentage points of growth a year in the long term, the spokesman added. He declined to quantify the expected damage of higher U.S. tariffs for German cars.

“The goal of the EU and the German government is to seal a trade deal with the U.S. that lowers tariffs for industrial goods on both sides,” the spokesman said.

Volkswagen’s Chief Executive Herbert Diess said in a Financial Times interview last week that higher U.S. tariffs could cost the automaker up to 2.5 billion euros a year. This would be roughly 13 percent of VW’s expected earnings in 2019.

German car exports to the United States could fall by almost 50 percent in the long term if Trump was to impose car tariffs of 25 percent, the Ifo institute has estimated.

For the German economy as a whole, higher U.S. tariffs and a no-deal Brexit together would also hit business sentiment and consumer morale which could throw the economy into a vicious cycle, economists say.

Household spending, the most important pillar of the domestic economy, could falter if uncertainty about the economy spilled over onto the labor market, Rolf Buerkl from the GfK research group warned.

“If employees get the impression during the course of the year that their jobs are no longer secure, this would have a direct negative effect on the consumer mood,” Buerkl said.

Less growth also means less tax revenues which limits the government’s ability to put together a huge fiscal stimulus package which could pull the economy out of a downward spiral.

Scholz is currently working on a draft law that aims to support companies investing in research and development with 5 billion euros ($5.7 billion) in tax incentives over four years, coalition sources told Reuters on Thursday.

The plan will be financed through the expected budget surplus, narrowing the room for any additional measures.

“If the government wants to present new fiscal measures to counter a recession, then it only has two options: either hiking taxes or taking on new debt,” a lawmaker in Merkel’s ruling coalition said on condition of anonymity.