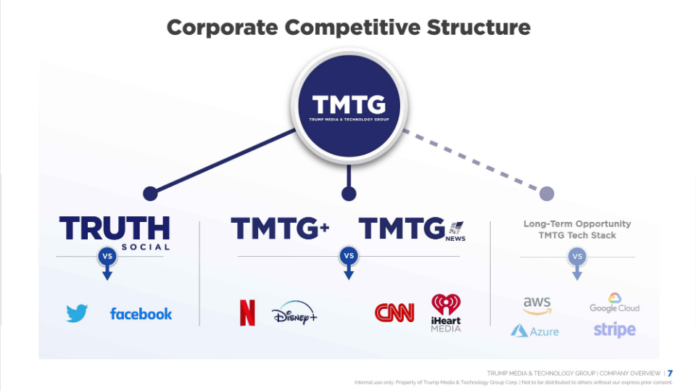 2021 will go down as a historic year in the markets, whether as a turning point, an end of a cycle, or the start of something entirely new. The resurgence of crypto assets; the rise and partial fall of the meme stock; the continuation of the bull market from either March 2020 or March 2009, depending on how you want to draw the lines; and the challenge of discerning between COVID and (hopefully) post-COVID one-time shocks and the potential onset of more permanent changes, such as the onset of inflation, all are part of 2021’s legacy.

That’s before getting into global political polarization or, in the U.S., the everchanging norms of public conversation. The new former U.S. President Donald J. Trump-associated SPAC, Digital World Acquisition Corp (NASDAQ:DWAC), sits in the center of both that discussion and our market moment. This week’s news of DWAC’s merger with Trump Media & Technology Group, TMTG, triggered the latest stock market explosion, as shares closed up 356% on day 1 and, as I write this pre-market Friday, are up another 55%. This excitement says something about the prospects of DWAC, but a lot more about where we are in the market overall.

What Happened With DWAC

Let’s start with the DWAC/TMTG business. I’ll try to keep my analysis politically non-partisan and focused on the business/valuation, as it were. TMTG’s pitch is somewhere in between political and apolitical – it intends to “create a rival to the liberal media consortium and fight back against the “Big Tech” companies of Silicon Valley”, and at the same time has a mission of creating a “big tent social media platform that encourages an open, free, and honest global conversation without discriminating against political ideology.”

The company’s slide deck, which offers the main and perhaps only presentation of the business strategy, is very high level, and also bounces between two main strategies. Slide 7 states the company’s “corporate competitive structure”, which spans from TRUTH Social, a social network to rival Facebook (NASDAQ:FB), Twitter (NYSE:TWTR), and other social media players to TMTG+, a media outlet to battle Netflix (NASDAQ:NFLX) and Disney+, and TMTG news to battle CNN and iHeart Media. They also suggest the possibility of building a full cloud and payment processing tech stack. The next slide fairly (if a little bit erratically) shows how media is evolving (or devolving) into a more partisan model, something that has happened before in the U.S. and may be a result of overabundant information and increasing reliance on subscription revenues instead of advertising. There are then slides about how the population is growing in the U.S, how then President Trump had a large social media following, how a poll in March suggested 30% of people would use a Trump-backed platform, and how TMTG+ would be an “on-demand streaming service” for news, sports, documentaries, and “non-woke” entertainment. Most jarringly, the presentation oscillates between the big tent message (slides 13 and 17) and the draw with conservative audiences (slides 15 and 18).

The press release states that the deal’s enterprise value was $875M, and could be up to $1.7B based on shares issued to TMTG if the stock price does well. I confess to being unsure how to get to shares outstanding to give a post-spike valuation, but if we take $1.7B at $10/share, we’re looking north of $10B valuation at this morning’s pre-market heights.

I don’t think anyone can pronounce with surety whether this company can succeed, at least without betraying feelings about the parties involved, but here are a few things just to flag:

The business doesn’t exist yet, so it has to do a lot to grow into such a valuation.
While the presentation set aside the full tech stack ambitions for the future, even just building TRUST Social will take time, money, and a lot of work to gain an audience and then monetize it; the same goes even further for TMTG+ or TMTG News.
TRUST Social has existing competition beyond the major social media platforms; Gab and Parler have both targeted similar mission statements, including an emphasis on “free flow of information online” (Gab) and sharing “without fear of being “deplatformed” for your views” (Parler). President Trump’s backing is a powerful differentiator in this lane, but the lane is not empty.
As Twitter user Compound248 pointed out, DWAC’s CFO is a serving Brazilian congressman, and the CEO is also CEO of Yunhong International (NASDAQ:ZGYH), a Wuhan-based SPAC that failed to close its planned merger with Giga Energy.
While former President Trump has a strong following and no doubt a large email list, his social media followings at least are not portable, so it will not be an overnight thing to build back towards the numbers quoted in the presentation.

It’s possible to look at this and say, given Trump’s magnetism and following and the market’s enthusiasm, that the company will have access to capital to, say, acquire Parler and Gab and roll up that lane of the social media space, and that people tired of Facebook might migrate to a similar looking platform (look at the video towards the bottom of this page) with less oversight and more like minds, and so there may be a business there.

That’s a fair enough argument. But from that concept to a $1.7B valuation today, let alone a $10B one, is a long stretch.

Euphoria To Go Around

DWAC is hardly the only asset that’s behaved like this. This week, Bitcoin set all-time highs, and while there is fundamental news related to the approval of Bitcoin ETFs (BITO and BTF), and fundamental cases tied to the blockchain, a “digital gold” replacement case, or increasing adoption, there is still a lot of expectation built into the price. And Bitcoin is solid gold compared to smaller crypto assets like Shiba Inu, where the investment thesis rests on Elon Musk’s Twitter account.

We have plenty of bubbly things happening in the broader stock market, and bubbles popping, even among “real” stocks. This week a prominent online trader went on CNBC to tout Upstart (NASDAQ:UPST) and blanked when asked to describe what the company does. On the flipside, Snap (NYSE:SNAP) traded sharply lower after issuing guidance of “only” 31% revenue growth, a sign of how highly the company was valued (roughly 24x 2021 sales even after this sell-off). Pinterest (NYSE:PINS) has had a couple rough post-pandemic surge quarters, and is now reported to be considering a buyout offer.

And of course, GameStop (NYSE:GME) and AMC Entertainment Holdings Inc (NYSE:AMC) remain at what would be all-time high enterprise values if they hadn’t peaked earlier in 2021, despite revenues meaningfully lagging pre-pandemic levels and the remaining possibility that their businesses are both permanently impaired.

What It Means For Investors: Stick To What You Know

GameStop and AMC are reminders that market giddiness can last. It’s hard to find the core cause of this – Federal Reserve monetary policy, abundant COVID and Post-COVID fiscal stimulus, the ease of apps like Robinhood (NASDAQ:HOOD), the global excitement around crypto and U.S. markets, social media and discord chat rooms and echo chambers, a nihilistic view of the economy, algorithmic trading magnifying market behavior, or more indescribable factors. Wherever DWAC ends up trading today or next week or by year end, the short-term bull case rests on these factors.

For long-term oriented, fundamental investors – and I include myself in this category – this sort of market behavior can be disorienting. It seems to devalue the effort we put into investing, and it calls into question how capital markets are working, and whether they are truly efficient means of allocating capital to companies who can grow and contribute to the economy and the world.

I’m not smart enough to be worried about the broader implications of meme stock trading and the fundamental questions it raises about the market. I think for investors who stick to buying and holding stocks in good, growing companies, at cheap or reasonable valuations, this sort of market action is entertaining but mostly noise.

I also don’t know that we’re in a market-wide bubble, per se. I’ve felt the market has been expensive since 2015, and in one sense or another I’ve been wrong. It could be the economy is poised for a Roaring Twenties style resurgence, a combination of new technologies, pent-up demand, a sea change in fiscal policy, and still accommodative monetary policy. It could be, on the other hand, that inflation or a resurgence in Covid-19 or our ongoing supply chain snarls or other factors ensnare the market, and these all-time highs are as good as it gets for a long while.

But seeing craziness like DWAC, or Shiba, or the SPAC madness from earlier in the year, or other meme stocks, or prominent market participants not knowing what they own: it all raises a caution flag. There’s a lot of silliness out there, and it is easy to get caught up in it.

The antidote to all that are two classic investing and even philosophical principles:

Know thyself, i.e. know what style of investing works for you and what you’ll be comfortable with
And know what you own, and why you own it, and what would change your mind about it

Whatever DWAC/TMTG’s prospects actually are, the current valuation is more than formidable. Market euphoria can fade away just as fast as it rises, and if it does fade, it could take down a lot more than just the headline names with it.

Disclaimer
Disclosure: I am long TWTR (a small position), AAPL, and may open a long position in PINS in the coming days.